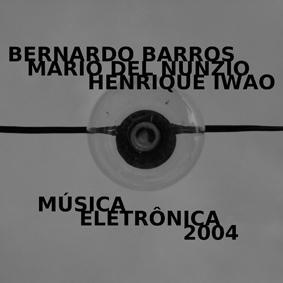 That all the pieces in this compilation were composed in 2004 (exceptions being Frankfurt, Frankfurt & Nec Spe Nec Metu, both composed in 2003), is far from being a curiosity. In such period of time, Bernardo Barros, Mario Del Nunzio & Henrique Iwao were living in the same city, Campinas, and studying at the Music Department of the State University of Campinas (UNICAMP), where they had the rare opportunity of being in a creative environment, full of exchanges between the participants and of occasions to show and discuss new works. From the last months of 2002 till the end of 2004, the university was open to new propositions and behaving as an open and living space. This fact resulted, in the works of these composers, in the pieces here presented (and others premiered during the same period), in which there are clear mutual influences (denoted by the use of similar sound materials and by sharing technical procedures), but also preoccupations and predispositions of a highly individual character (the improvisational gesturality of Del Nunzio, the automated procedures of Barros, the structural rigidity of Iwao).

Nec Spe Nec Metu, by Del Nunzio, ìwithout hope nor fearî, begins the exploration of digital noises and ìextended electronic techniquesî, also with a dynamic and tense gestural quality, and a will to give a notion of corporeality to the music. The piece uses many non-conventional compositional procedures, such as the creation of digital flaws by the consecutive application of a great quantity of sound processes with opposite functions. In a very different way, this intention of a physicality is also present in some other pieces here presented, such as in Escrito com o Corpo (Written with the Body), by Barros, in which the ultra-low sounds, perceived or not, may proportionate the opportunity to "let the stomach vibrate".

Back from Europe, after being in contact with the german breakbeat, Barros composed Frankfurt, Frankfurt, taking rhythmical and timbrical elements from the pop culture. The piece has a homogeneous material and intends to develop a significant musical structure, through tempo variations and density control. Meanwhile, Del Nunzio, in his Improviso em Branco & Preto (Carta as Videntes), uses samples from many different sources (mainly from percussion excerpts of works by contemporary composers, and drum solos by rock drummers), with its intrinsic gersturality, having the specificities of the samples conducting in an almost improvisatory way the development of the piece. Anyway, there is a perceptible thematic proximity of both pieces.


The pieces by Iwao here presented have some of the characteristics which define his actuation as a composer (at least during this period), such as: an attention to the pre-compositional formal plans, rigorously; the way he deals with layers, sculpted during the realization of the piece; a certain obsessiveness. In the laborious Estudo para um Instante Vazio, the imperfections of an extensive and problematic technically manual work constitute the main body of the piece, being such characteristics on one hand determined by the chosen technique for the sound generation (synthesis by graphical representation) and, on the other hand, by one practical result of this technique (appearance of clicks - and the compositional option of accepting these clicks). The sections and materials used in the piece are pre-defined abstractly and treated with maximum rigidity a avoiding, thus, any didatism (meaning a direct induced correspondence between the compositional plans and an intended comprehension of the music).
(Henrique Iwao and Mario Del Nunzio. Translation: Mario Del Nunzio)

---
Bios:
Bernardo Barros (born Maceio, 1980). Is dedicated to the creation and promotion of contemporary music as composer, performer and technician on productions that focus solely on modern artistic trends. As a composer he has projects that involve chamber music and electronic music. As a performer he has focused on interactive performance, improvisation and live-electronics. As a technician he can assist projects involving programming languages for computer music, specially SuperCollider 3 and LisaX. In 2007 he founded 'Cyclone' with Mario del Nunzio (electric guitar and live-electronics), a group dedicated to improvisation and collaborative composition projects. He has studied composition at Unicamp (Bachelor Degree, State University of Campinas) with Jose Augusto Mannis and Silvio Ferraz. And at the Institute for Sonology at the Royal Conservatory of the Hague (Holland). During these years he also had the opportunity to have composition lessons with Richard Barrett, Mark Andre, Brian Ferneyhough and Helmut Lachenmann. He is currently a Masters candidate at USP (Sao Paulo University).

Mario Del Nunzio(1983, Sao Paulo, Brazil). Composes electroacoustic and instrumental music; plays with improvisation and non-written music groups (electric guitar and electronics); also works with installations and multimedia creations. Produces experimental music events in Sao Paulo, and is director of the Ibrasotope, together with Henrique Iwao. Recent works include the multimedia performance / installation "Corpos Urbanos", co-authored by the dancer Melina Scialom, and a piece for electric guitar quartet, commissioned by the Zwerm quartet, from Brussels, Belgium.

Uploaded by Clinical Archives on August 3, 2009